To improve the robustness when generating reports with several months of data, CVI Fusion now displays reports with pages. 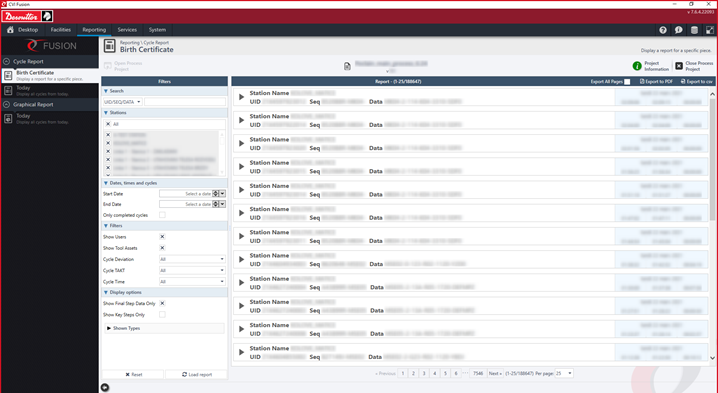 At the bottom of the report, all the available pages are displayed, and a new report is generated when a new page is opened to reduce the amount of data requested from the SQL Server.

[CVI Fusion] Hotspots change in every occurrence of copied steps

When an Action Tool step was copied several times, if the hotspots configuration of one of these copied steps was changed, then the modification was affecting the initial step and all the subsequent copies.

[Infinity Client] Display of process much slower after upgrade to v7.6

When the "Restart From Last Step > Optional" was selected, Infinity Client was starting slowly.

Dynamic tooling properties were reducing the performance of the Infinity Client user interface. This was particularly evident when scrapping a cycle or when restarting the previous cycle after a restart.

Infinity Client v7 was not able to load any cycles of its local traceability from a 6.X version if the cycles were containing Logic File Search steps.

At start, after having cleaned all the old operations, Tracker had issues to store this cleanup in the local database. Thus, it was freezing every time it was started.

When Infinity Client executes a plugin that generates several lines of results, the report was not showing any line.

It was not possible to set up any custom Text String as EOL suffix in the TCP/IP asset settings.

[CVI Fusion] Copy Station with Steps failing on some stations

CVI Fusion could raise some error popup when trying to copy a station with its steps.

When deploying a configuration with a Logic File Function, CVI Fusion was raising an error about a missing “String Split Separator”.

Infinity Client was locked on Action Tool step if the user was clicking several time on retry following a specific timing.

When set to a static value, the time allocation of a step remained at 0 sec when executing the step. At hence, the Continue after timeout was not working.