started a topic over 1 year ago

Users now have the option to define hotspots dynamically instead of being forced to use the CVI Fusion user interface for hotspot placement in Action Tool Steps. This is particularly useful when sourcing images for stations from a centralised or remote location. 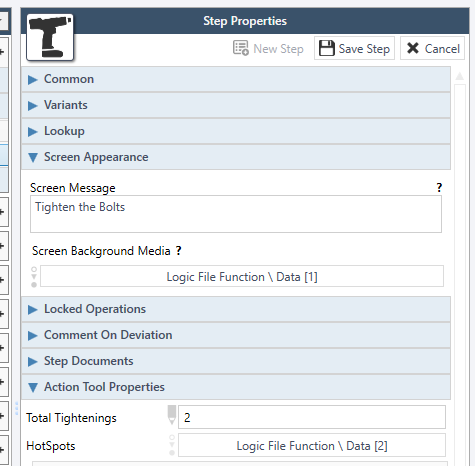 Once an image has been defined as being sourced, hotspots will automatically be defined in the same way. By default they will have a value of "undefined" and not be forced onto a user's media.

Users are now able to connect their CVI Fusion to a directory service byusing LDAP Protocol. This allows CVI Fusion to connect to an LDAP server and therefore validate users via their Windows logins instead of user credentials defined within CVI Fusion.

To access and defined the LDAP Server properties for this, see "System > System Configuration > LDAP/Active Directory Settings". Once configured, a CVI Fusion admin can add users to CVI Fusion by their directory service information and their passwords etc will be manage as such in future.

Previously, the default parameter for properties linked to previous step results was "Station Name". This was not useful in all cases and could cause issues, therefore a new default value of "undefined" has been added instead.

Previously, Infinity Client would wait just 5 seconds for a response from the QMS service before determining that the service had timed out and that the process should continue. Users can now define the timeout value by creating the file "Infinity.fis" in C:\ProgramData\Desoutter\ProcessControl\InfinityClient\Config. It should have the following content:

You can then modify the "QMSConnectionTimeout" value to suit your needs. This property is represented in milliseconds.

Due to internal error during the execution of an Action Printer Step, InfinityClient was stuck on the step with the “Printing in progress” message and it was not possible to skip the step.

When a new version of the process was applied while process in concurrent mode was running, process could not exit properly and the "Apply New Process" pop-up remained indefinitely on-screen.

The user filter in the User Manager menu of CVI Fusion was not correctly working.

In the step advanced properties of the Action Tool step in CVI Fusion, it was not possible to select the PSet immediately. User had to save and come back in the step to select it.

When doing a backup of version 7.5 and then restoring it, the setup was deleting the installation of Infinity Client and sometimes installation a version 7.4 instead of the 7.5.

After a “retry only bad spindle”, if an operator carried out tightening operation in between the retry attempt and the tool's activation then, the tightening system could tighten only 1 bolt.

When setting a PSet from a previous step result, Infinity Client was displaying ‘1’ as PSet instead of using the previous result.